It's time for the Rose Festival!

Get a Copy
Note: This game is printed on demand from thegamecrafter.com. 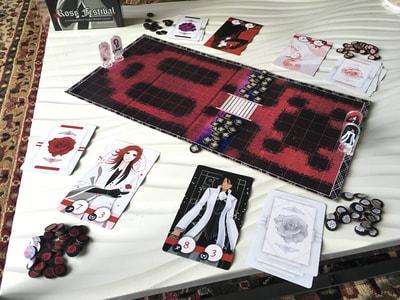 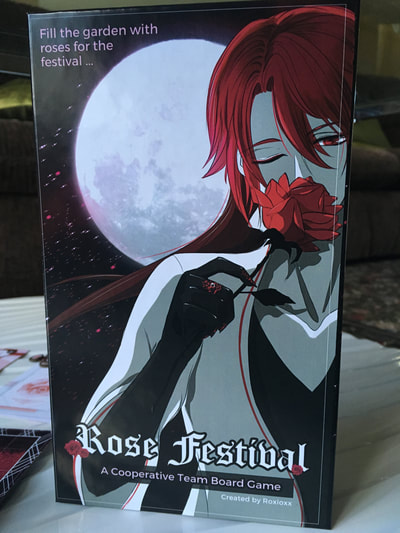 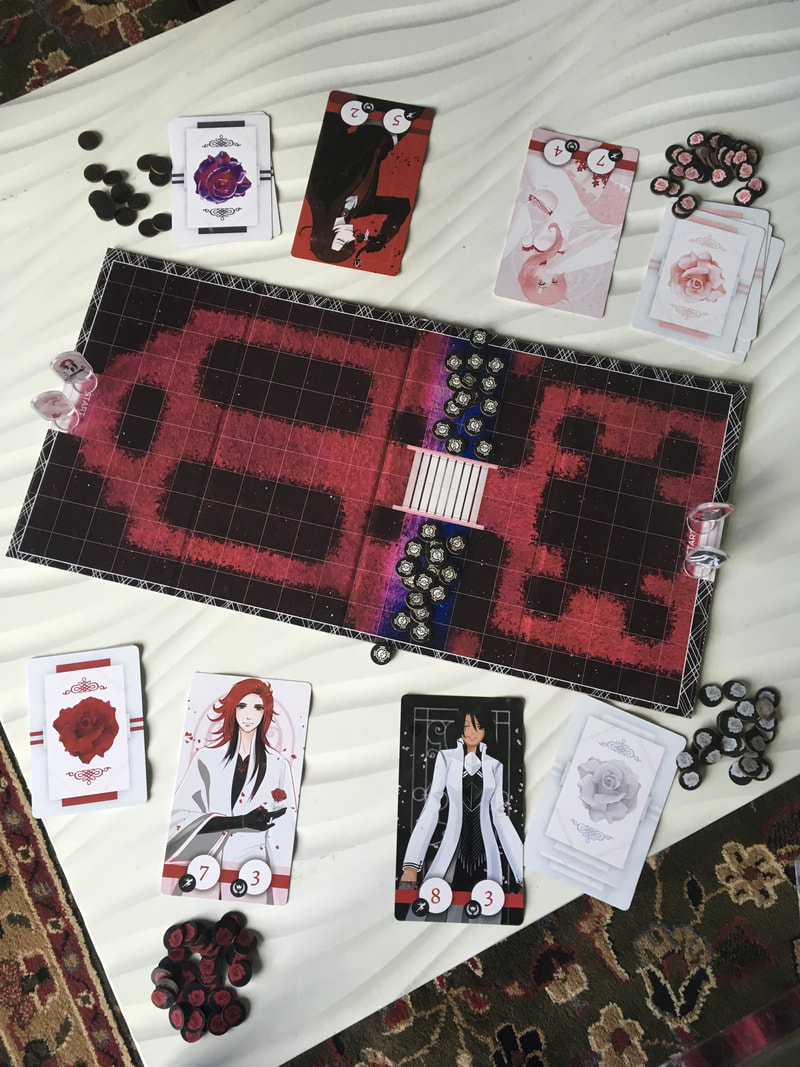 Note: I like to put my cool down tokens in the water so that everyone easily pick them up.
Objective
Fill the garden with roses. You all win if you don't give up. The challenge of this game is seeing if you all have the patience to see your beautiful garden to the end. You'll find newer ways to expedite the process and strategize how to get to the end quicker.

Playing
Each turn you can move and plant roses up to as many Action Points (AP) as your character has. That number is located on your character card to the left (next to the icon of a person running). Each square you move and each rose you plant costs 1 Action Point. Your Character Pawn cannot move through bushes or water.

You need to be adjacent to the rose bush in order to plant it (not diagonal). Since these roses grow on vines, once you have planted a rose in the bush square closest to you, you can keep planting and your roses will grow in the squares behind that initial one.
You can unlock Abilities by how many roses you have planted. This Growth Factor (GF) is denoted by the number on the right side of the Character card next to a crown and laurel icon. You can grab a new Ability Card (randomly) from your Character's ability deck per each multiple of roses planted. For example, Warrick gets a new ability card each 3 roses he plants. If he has planted 13 roses on the board, he'll have unlocked 4 of his Ability Cards.
Abilities allow you to quicken the pace at which you all plant the garden. You can use as many of your unlocked skills as long as you pay the Action Point cost (if they have one; that AP cost is denoted by the number on the left of the Ability Card).

Some Abilities have a Cool Down (denoted by the number on the right side of the Ability Card next to a clock icon). What that means is once you have used that ability, you have to wait that many turns before you can use it again. Keep track of remaining turns by placing Cool Down tokens on those ability cards as soon as you use them (they have a clock icon in them).

Each skill can only be used once per turn.

Once you've done all you can, let the other players know so that the next player can begin their turn.
(A round refers to the time-frame of each player's turn before it goes back to you).


Winning
If your garden is absolutely brimming with roses with no bush left without a rose (or you find your garden looks good enough), give yourselves a high-five. You've got a garden to show off for the festival.

In fact, use #RoseFestivalGame on Twitter to show off your garden (if you're so inclined to... at least take a picture for the memory).

A little backstory about this game...

I myself am not a hardcore gamer. At my first workplace, I used to go to these after hours gaming nights and get chewed out for "not playing good enough." I mean, I went there to know more about the people I work with and relax. Maybe have a nice conversation.

So I created this game for that kind of a friendly, getting to know each other environment. I already had an idea for an art direction. I'm not sure how many of you all remember, but I had a Kickstarter for a new video game called "The Heart of Dorian-Gray." Total failure. It didn't even reach the halfway mark. I reused all the concept art and mood boards for this board game.

The first prototype of "Rose Festival" was twice as big but people couldn't muster through it. Then it was a quarter this size, to save on the cost, but that cheap feeling took away from the aristocratic and premium feel I had envisioned for this beautiful game. I had to to find balance and that took me over two years to finally get.

It was completely worth it.
"Legend of Auferre" drawings and interactive content are © Roxioxx. 2010-2020 (aka Roxana Hasanat)